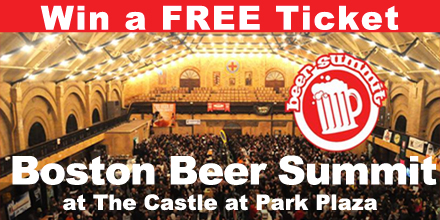 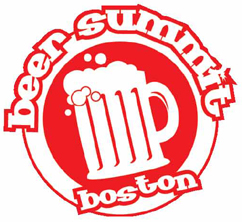 Enter Here for Your Chance to Win a Free Ticket to the Boston Beer Summit!!

A winner has been chosen and notified, but you can still buy tickets by clicking here.

The 18th annual beer tasting extravaganza draws in approximately 2,000 attendees over the course of three sessions over two days, with one session on Friday, April 15th from 6:00 to 9:30 p.m. and Saturday from 12:30 – 4:00 p.m. and 5:30 to 9:00 p.m. Guests will have the unique opportunity to sample 200-plus beer varieties from over 50 local, regional, national and international breweries looking to showcase signature brews, seasonal favorites and new varieties not yet available to the public.

“The Boston Beer Summit has grown exponentially in popularity, volume and attendance over the last eighteen years that we’ve essentially evolved into two beer tasting shows in one – a local craft beerfest inside a national beerfest, while paying homage to a few international breweries as well,” said Boston Beer Summit Co-owner, Mike Munnelly.

Widely considered to be the premier craft beer tasting event amongst local and regional beer enthusiasts, the Boston Beer Summit has occurred during Boston Marathon weekend every year since 1999, inspiring in the same capacity by showcasing the talents of the locally best brewed beers while welcoming the national and international elite with open arms. The Boston Beer Summit team only allows breweries with a commitment to craft and an excellence in craftsmanship to partake in its annual top craft beer event here in the heart of New England.

“We consider ourselves lucky to live in New England which houses some of the best craft breweries in the country, but we’re exceptionally proud to bring other talented and respected breweries outside of our region to Bostonians who might not otherwise get a chance to try them,” added Co-owner, Shawn Rich.

“We went above and beyond this year, ensuring tasting lines are shorter and quicker for our guests and motivating our participating breweries to unveil their summer brews and limited-run editions at our event,” said Co-owner, Connor Brennan. “Everyone from the avid beer consumer to the occasional beer drinker will love what’s being poured. There truly is something for everyone.”

For additional information on the 18th annual Boston Beer Summit and to purchase tickets, please visit www.beersummit.com. Tickets are $55 per person in advance, $65 at the door and include admission, tasting mug, unlimited beer sampling, live entertainment and food from local vendors. Boston Beer Summit updates will also be posted continuously on Facebook (@BeerSummitFans) and Twitter (BeerSummit) between now and Boston Marathon weekend.

Click here to read Wicked Cheap Boston’s interview with one of the co-owners of the Boston Beer Summit.

If you’re reading this blog post-COVID and are a craft beer lover looking for beerfests and beer tasting events, but not sure if in-person events are for you then we recommend checking out Host Events. They are a Boston-based virtual events and team building company and they offer virtual beer tasting parties and happy hours online featuring some New England breweries such as Bent Water Brewing Co. in Lynn, MA and Mason’s Brewing Co. in Maine. Beer boxes and cocktail kits are available for delivery as well, so go check out HostEvents.com today for your next virtual happy hour!

Brewery, Events, Food and Drink, Giveaways, Things to Do