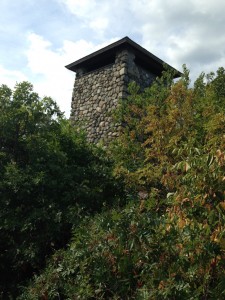 If you’ve driven North out of Boston on 1-93 when you’re going past Medford you may have noticed a stone tower up on a hill on your left side as you begin to pass through the Middlesex Fells Reservation and wondered what it was. Well, it’s Wright’s Tower and it offers one of the easiest ways to get a great view of the Boston skyline from afar without having to travel far. 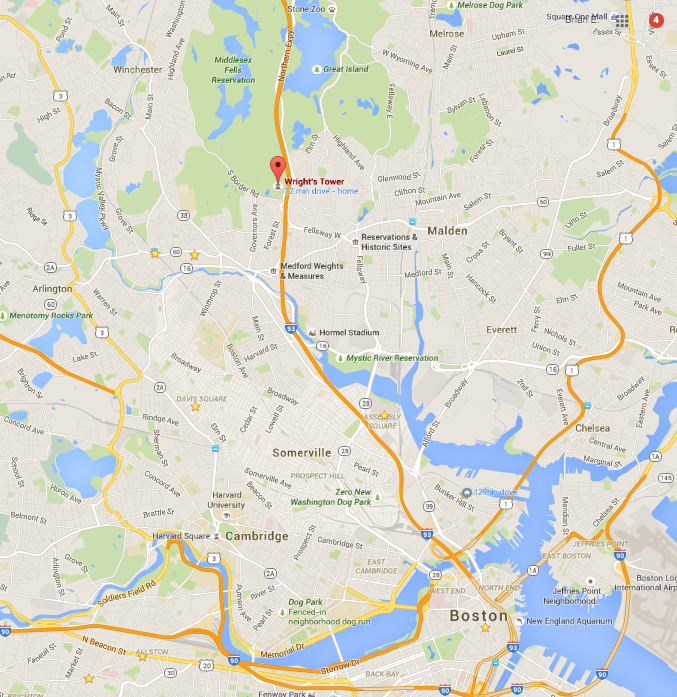 It was built in 1937 as part of the Works Progress Administration, which was an agency formed by FDR’s New Deal to create jobs. It was restored in 2008 and a plaque was added to honor Elizur Wright, who initiated plans for making the Middlesex Fells in to a public park.

There are many entrances to the park, but for getting to Wright’s Tower there are 2 that I’d recommend. If you want to stretch your legs a little on a 2 mile hike then park at Lower Sheep Fold Parking Lot off of I-93 and follow the Skyline Trail all the way to Wright’s Tower. I recommend going at an off-peak time because the parking lot is fairly small and this being one of the most popular entrances to the park it fills up quickly. You will be tempted to park in an empty grass lot between 28 and 93 just in front of the park entrance, but don’t do it! I’ve personally seen cops ticketing every car parked there.

If you’re feeling less ambitious and are just looking to get right to the scenic view with less walking, park at the entrance at the intersection of South Border Rd and Governor’s Ave in Medford, MA. It’s only a half mile hike from there and should only take you 15 minutes. So to get up, enjoy the view, and get back down can take you only 45 minutes. It’s a great way to get a quick dose of fresh air if you only have an hour to kill. 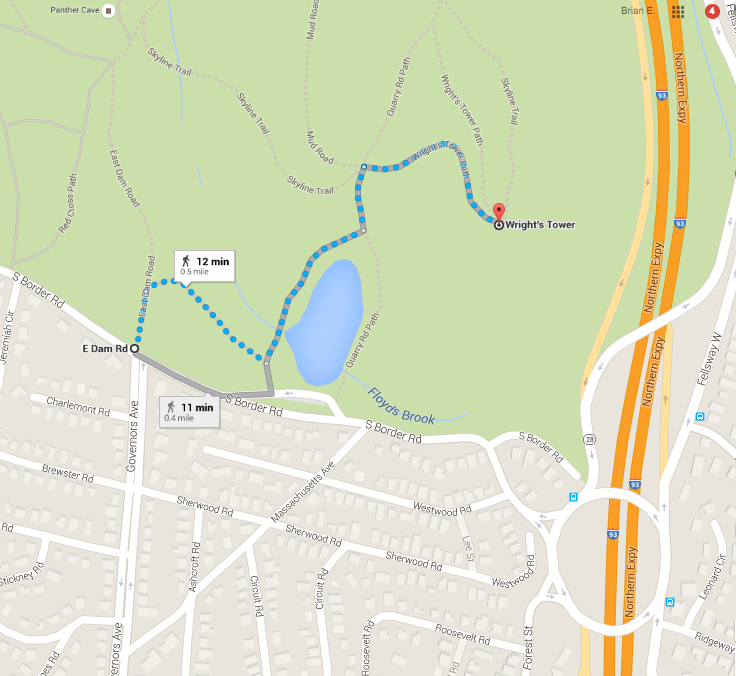 As for parking at this entrance, it’s a very small dirt lot just off the side of the road and can only fit a few cars, but you might get lucky! I don’t think many people use this entrance. Or you could park on the residential streets in Medford and take a quick walk to the entrance. Here’s a view of the small dirt lot entrance. 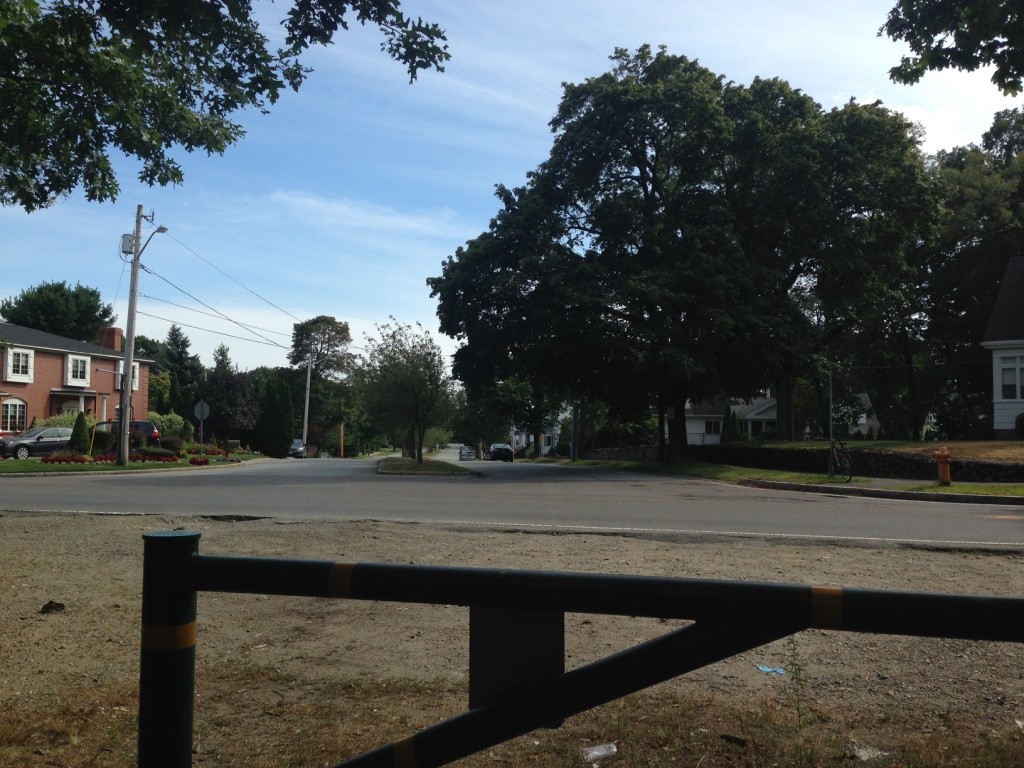 Personally, I took my own longer route. I entered through Victory Park off of Winthrop St next to Medford High School because I wanted to do some trail running that would take me at least a couple miles. I highly recommend this if you’re in to trail running, though caution you to watch your step as there are lots of rocks, roots, twists, and turns along the way.

From the S. Border Rd + Governor’s Ave entrance this is what parts of the walk look like, so you know what you’re getting yourself in to. There is a slightly steep climb at the end with a rocky trail so watch your footing. 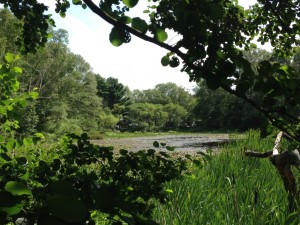 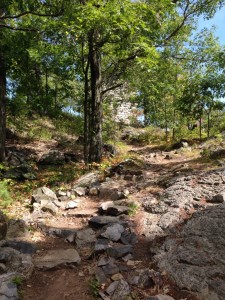 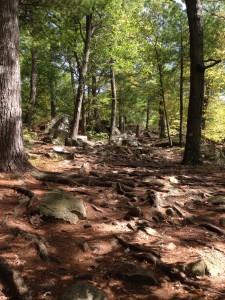 Once you make it to the top you’ll see the old stone building known as Wright’s Tower. It looks like a medieval guard tower, but don’t worry there are no archers up there to shoot you down. 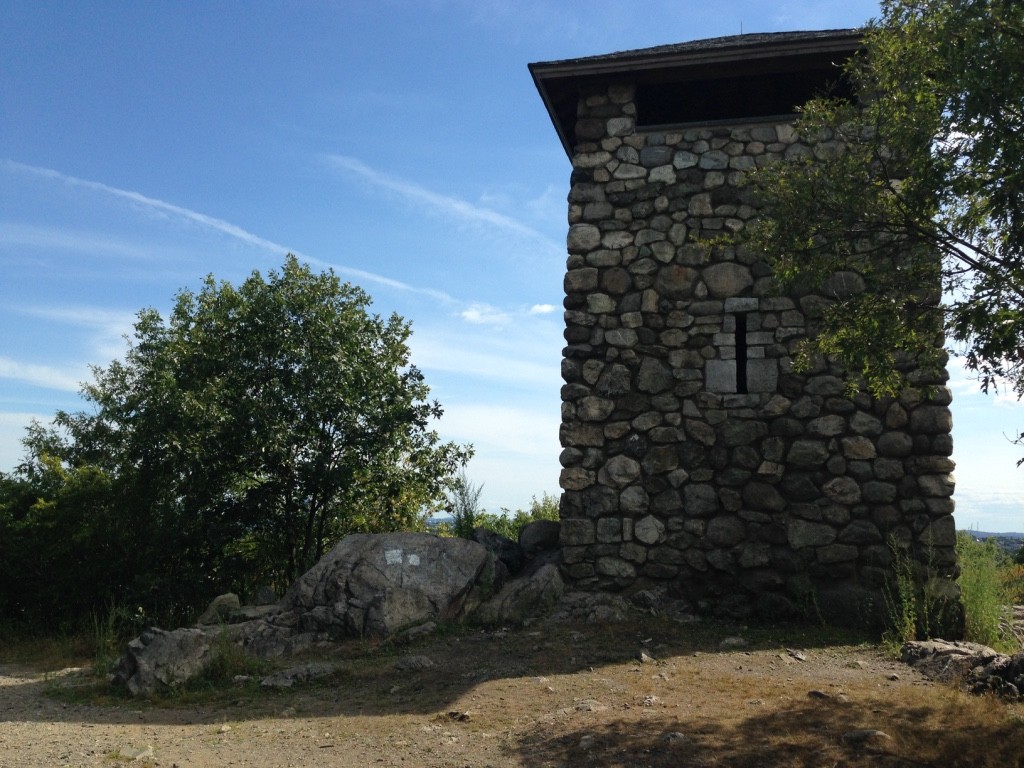 I’m told it’s hit or miss on whether the door to the tower was open. Luckily for me it was open when I visited so I got to enter the tower. 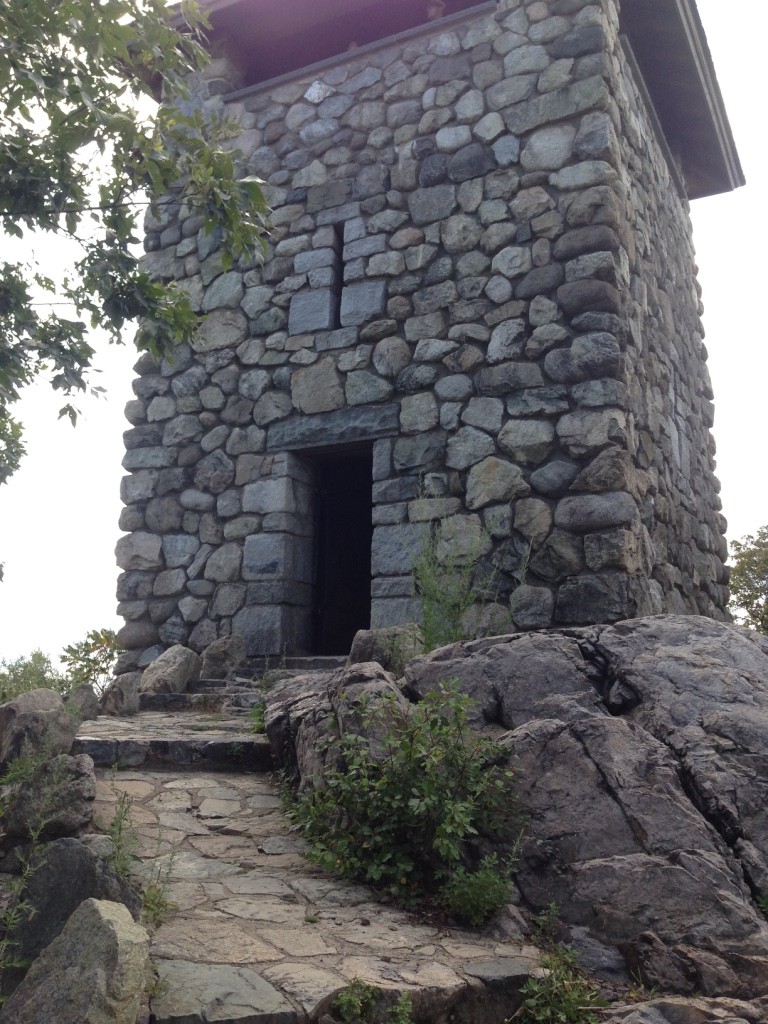 Once inside you can make the short climb of about 40 stairs up to the lookout. 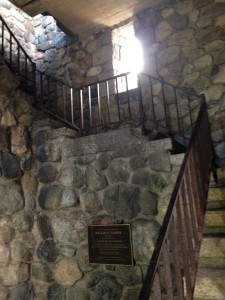 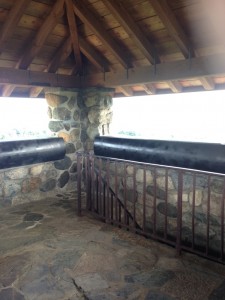 From the lookout platform you can get 360 views of the surrounding area and a view of the Boston skyline in the distance.

Here’s a picture of me all sweaty and gross in Wright’s Tower. I know I look horrible, but hey I just finished a 2 mile trail run to get up here. At least it’s proof I was there! 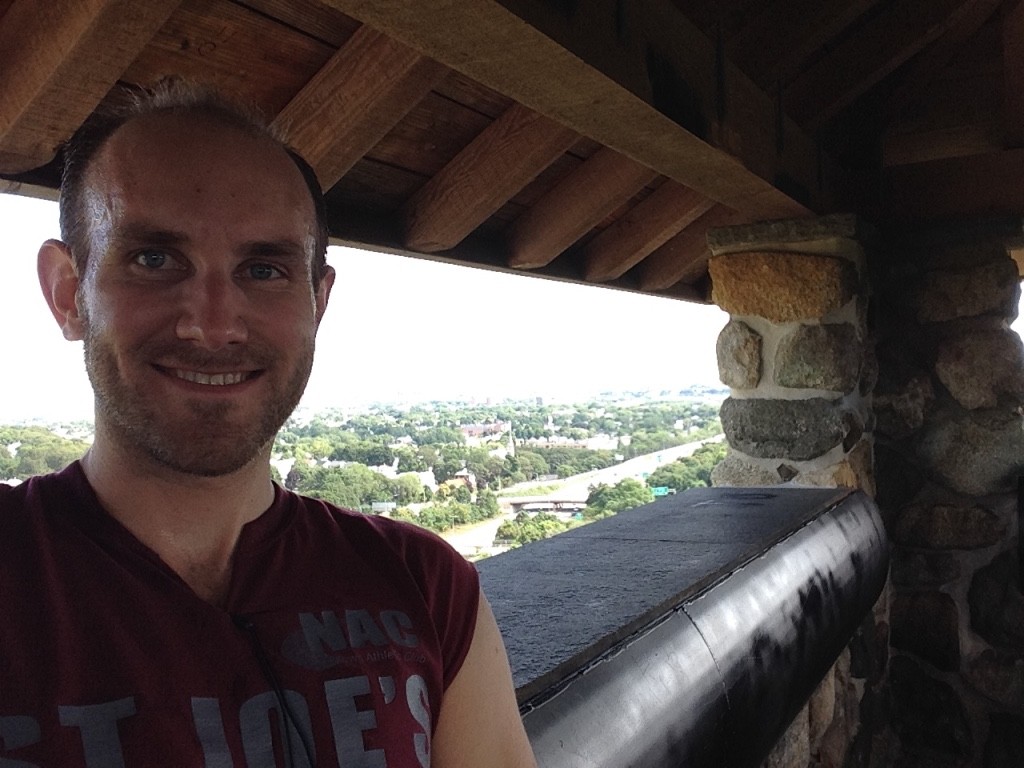 You can also get some great views from outside the tower. There is a rock formation between the tower and the downhill where I recommend sitting and relaxing in the sun for a few minutes. 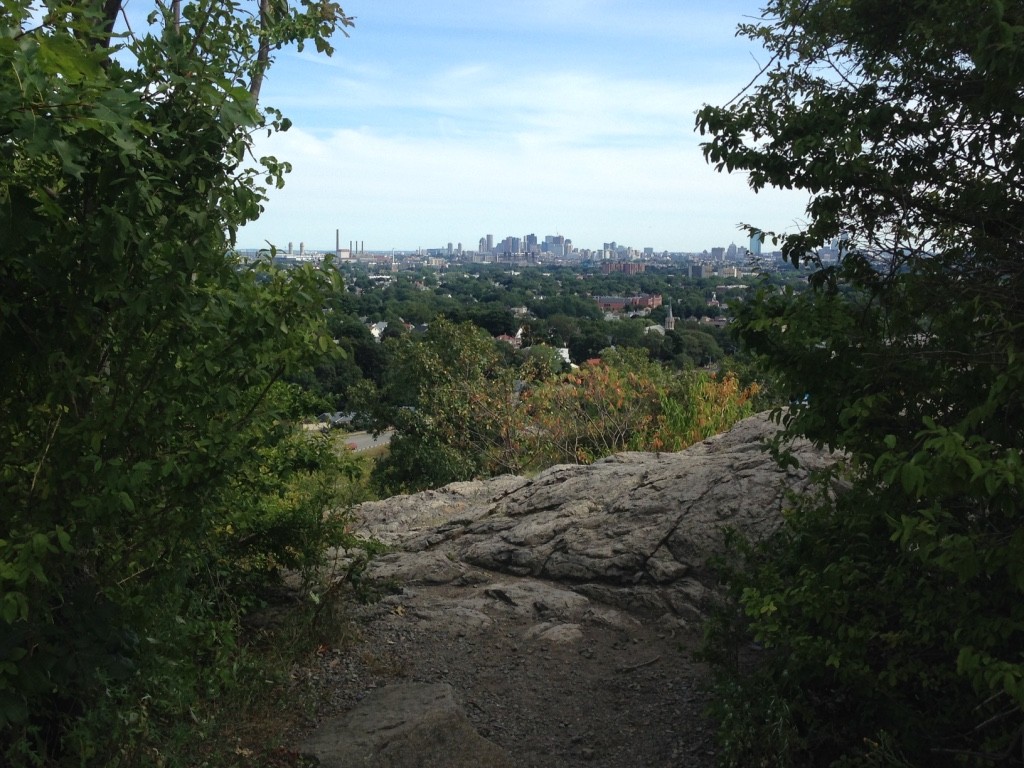 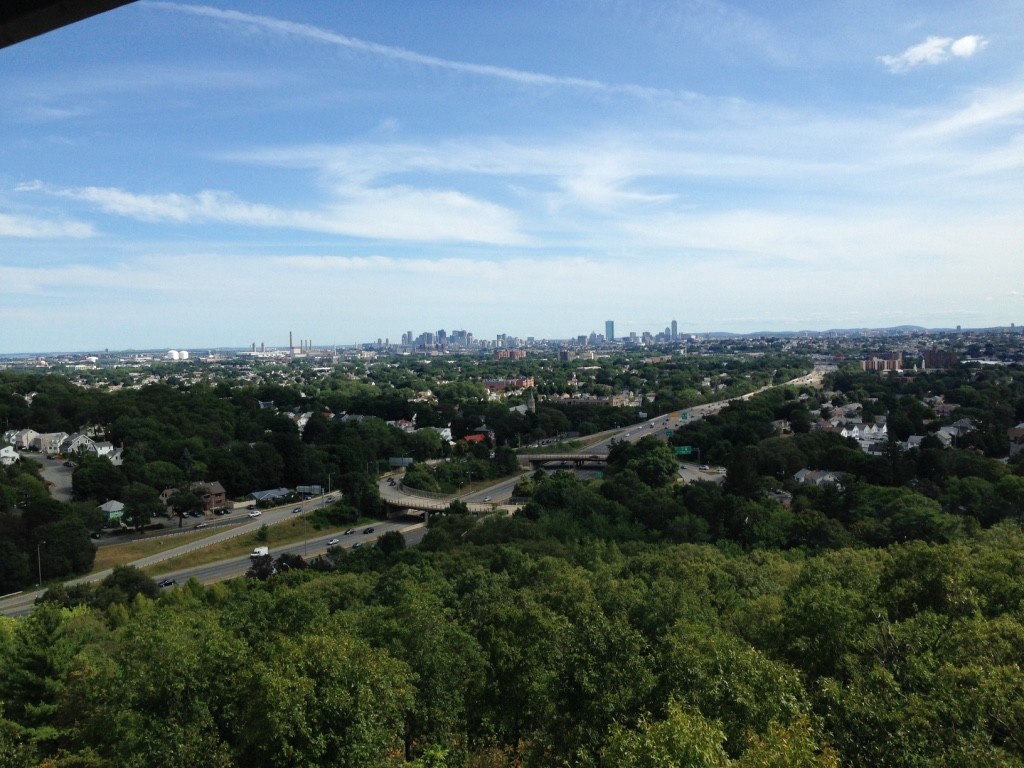 After taking in the views from Wright’s Tower if you have some more time to spend I recommend checking out some of the trails on your way back down. Here are just a few images form my own hike. 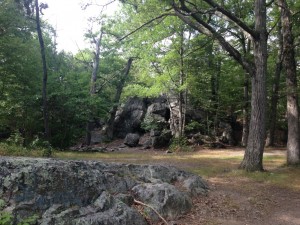 Some sort of rock spiral. Maybe druids or witches come down from Salem once in a while? 😉 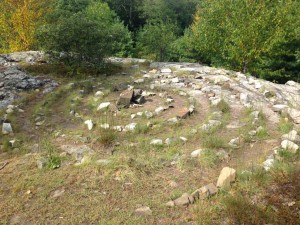 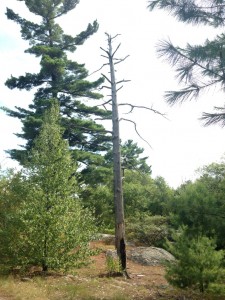 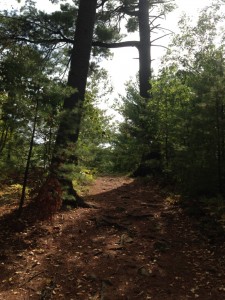 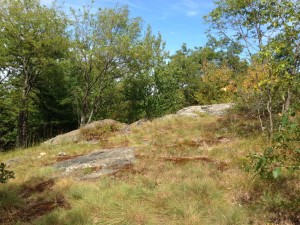 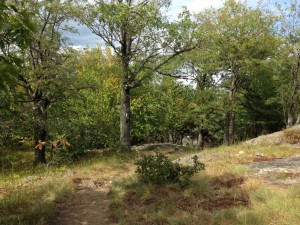 Well there you have it… If you’re bored and the weather is decent and you’re looking for a nice easy hike through some quiet woods with a scenic view to cap it off, then Wright’s Tower in the Middlesex Fells Reservation near Medford, MA is your best bet if you don’t want to drive very far. If you decide to hike more of the Middlesex Fells, here is a link to their official trail map.