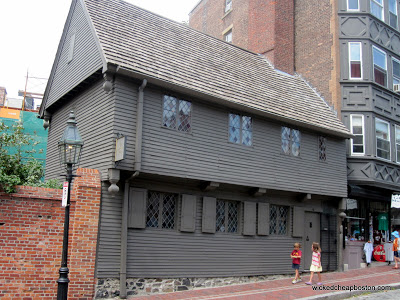 Another beeeautiful day in Boston and another perfect day for playing a tourist.

Built in 1729, this Puritan meeting house was used for church services as well as political gatherings.  Most importantly the meeting that lead to the infamous Boston Tea Party on December 16, 1773 was started here.  Today, the meeting house stands as a museum with occasional readings and lectures.

However, for this one I hafta say…save your money.  I was underwhelmed.  There’s a row of displays highlighting the ways the building had been used, with some creepy sculptures (see below).  But I didn’t feel it was worth the price of admission. 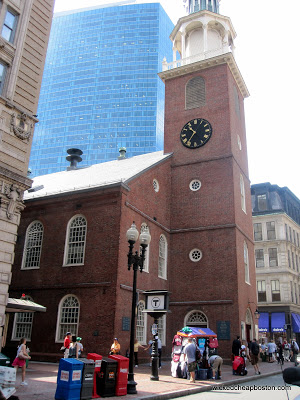 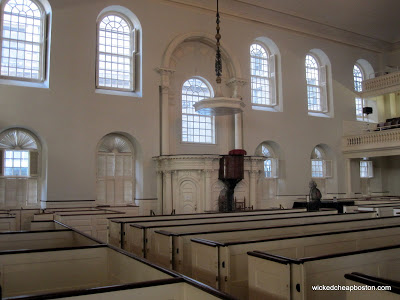 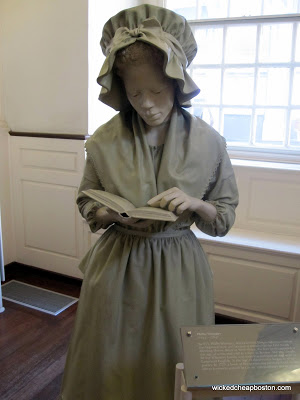 Aaaaah! I kept waiting for this to start moving/talking like those “living statue” street performers. 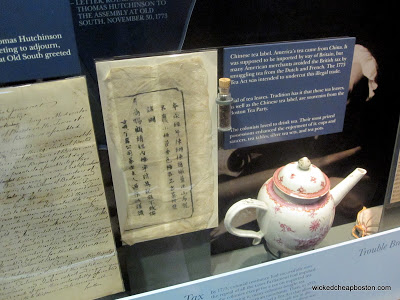 A vial of tea from the Tea Party.

9. Old State House and the Site of the Boston Massacre
This was the seat of British government in the Revolution. Sitting in the middle of what was once King Street (changed to State Street after the Revolution), the distinctive structure was once the focal point of the city. Now dwarfed by skyscrapers, it houses a subway station, museum, and in my opinion one of the best gift shops in the city (they had Samuel Adams bobble heads!)

Rather than spending the admission fee at the Old South Meeting House, save your dollars and come here instead. The museum itself is small but the exhibited items are not what you might expect. What really makes the admission price worth it here, though, is the guided tours. There are tours daily of the interior of the building and a Boston Massacre tour that takes you outside. These are dense history lessons (but I like that kind of thing). You’ll definitely learn a lot about both the Old State House, early colonial government, and events leading up to the Boston Massacre.

Another highlight is the audio tour of one of the exhibits. You call a specified number on your cell phone, plug in the number of whichever display you’re standing in front of, and get some audio highlights. Though kinda cheesy (with actors playing the parts of colonials), it’s still a neat feature. 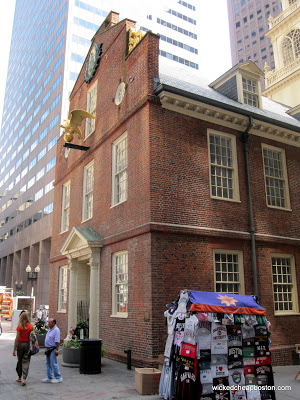 The Declaration of Independence was first read to the people of Boston from this balcony and the tradition continues every year on the Fourth of July.

John Hancock was a snappy dresser. 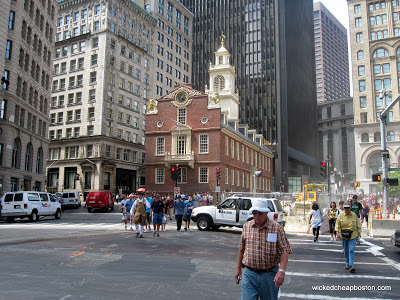 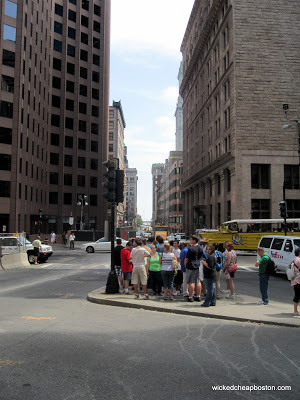 Those folks are standing on the site of the Boston Massacre in which five colonists died. Read more about the Massacre here (or take the tour from the Old State House, its really interesting).

10. Faneuil Hall
Built by the prosperous merchant Peter Faneuil as a gift to the city of Boston in 1742 (then later rebuilt into the larger structure that stands today in 1805 by Charles Bulfinch.) The first floor was (and still is) a marketplace while the second floor was (and still is) a public meeting hall. A statue of Samuel Adams sits outside the hall – he dominated meetings here.

Entrance to the hall and a short talk by National Park Services rangers is free and occur every thirty minutes from 9:30AM to 4:30 PM. I’d definitely recommend taking a look.

I wasn’t able to go into the hall yesterday for valid reason – a ceremony for immigrants being sworn in as American citizens was taking place! Yay! This ceremony occurs twice a month at the hall. 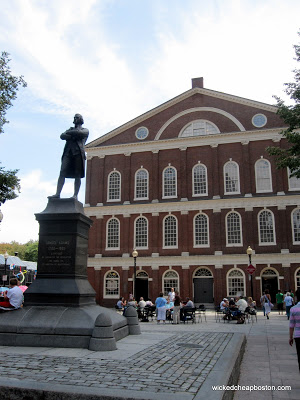 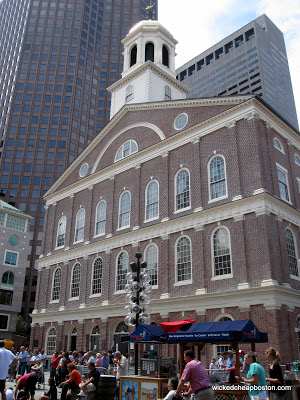 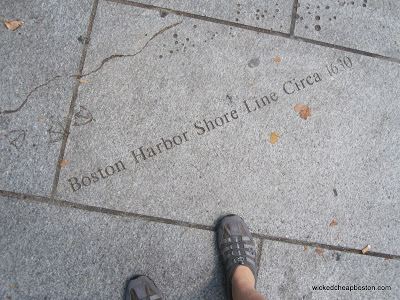 When you’re walking around near Faneuil Hall, look down. The original shore line is depicted by some carvings in what is now sidewalk. (Quick geography lesson – Boston was once a pretty tiny peninsula but was made bigger by carving up some of the hills in the city and putting that dirt in the harbor. Voila, more land.)
(Like my walkin’ shoes?) 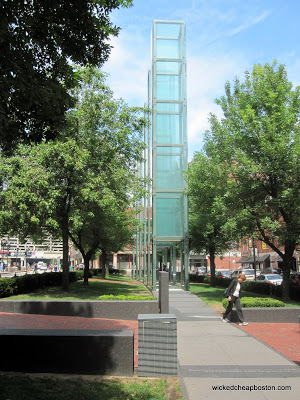 Nearby is the New England Holocaust Memorial, a tribute to the millions of people who died. 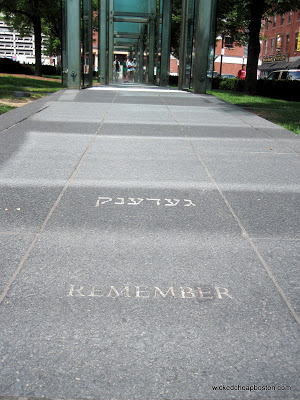 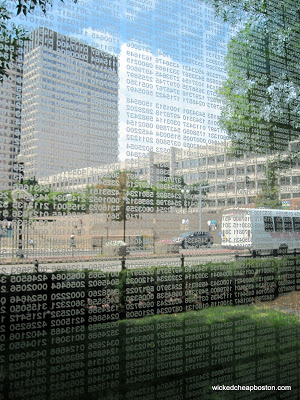 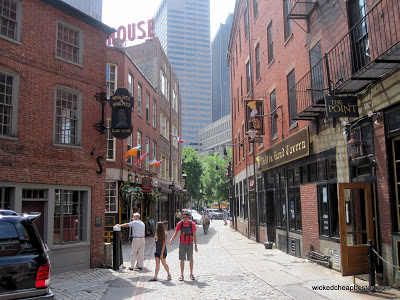 Back on the Trail, headed towards the North End. 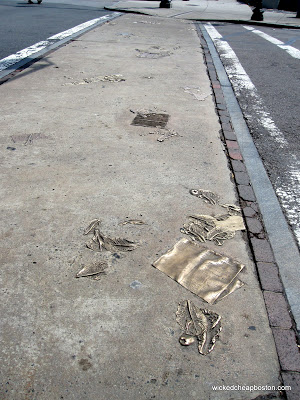 When crossing over to the Rose Kennedy Greenway, look down. These gilded sculptures embedded in the crosswalk symbolize Haymarket, the open air market that has been here since 1830. The market is open every Friday and Saturday. You can get super cheap produce here, just eat it fast! Its cheap because its nearing its expiration date.

11. Paul Revere’s House
This wooden structure was built in 1680 and bought by Paul Revere in 1770. It is the oldest building in Boston still in existence. Revere was living in this house the night of April 18, 1775 when he went for a little late night ride on his horse.

Admission to the house is $3.50 for adults, $3 for seniors and students, and $1 for children 5-17. You can also tour the Pierce-Hitchborn House next door which was owned by Revere’s first cousin for $2 extra.

If you’re interested in architecture and home decor of the 17th and 18th century, I’d say visiting the Revere House is worth it. It’s not a huge museum – just four rooms of the house – but it’s relatively cheap and of neat to see. 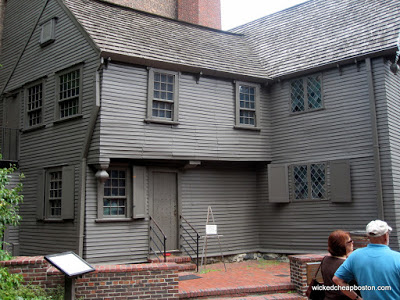 (Photography isn’t allowed inside the house) 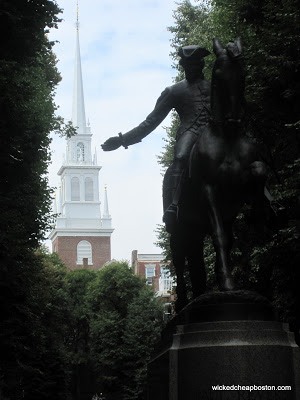 On the way to Old North Church, you walk through Paul Revere Mall, which is a fantastic place to sit and eat a cannolli…..

12. Old North Church
Officially named Christ Church in the City of Boston, this is the oldest standing church in the city dating to 1723. The 191 foot steeple has fallen twice but is an exact replica of the original. You may have heard that old “one if by land, two if by sea” deal – this is the steeple where the lanterns were hung to alert citizens in Charlestown how the British were about to be all up in their business.

A self guided tour is by donation and a guided tour taking you up to the bell tower and down to the crypt (muahaha) will set you back $5 for adults, $4 for children, students and military, and $3 for seniors 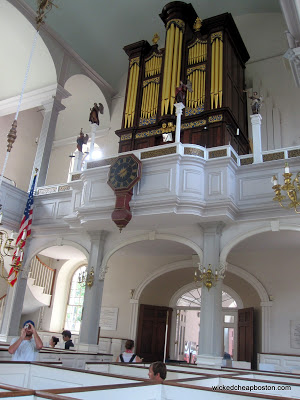 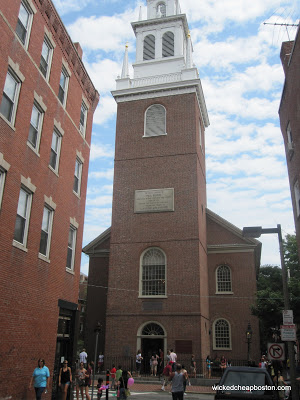 13. Copp’s Hill Burying Ground
Oh hey look, another cemetery. This one is the second oldest in the city (1659). Free to the public. 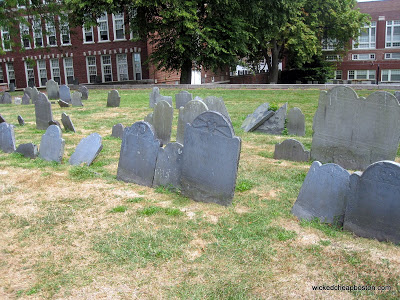 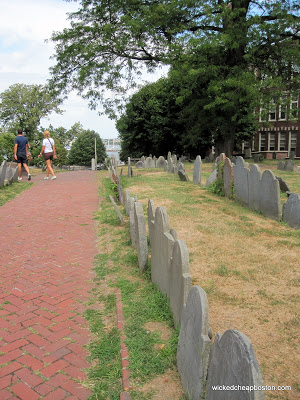 14. USS Constitution
After a bit of a walk, you make it to the Charlestown Navy Yard and the USS Constitution or “Old Ironsides.” This undefeated frigate got her during the War of 1812 when cannonballs bounced off her sides.

Free tours guided by an active-duty sailor starts every half hour 10:30 AM – 3:30 PM. If you’re not interested in the tour, you can visit the top deck, also for free. I would have liked going on the guided tour but the line was too long by the time I got there in the early afternoon. I might have to drop by again.

The USS Constitution Museum is a great stop for kids. Admission is by donation. The museum is packed with hands on exhibits that are just as amusing for the “big kids.” 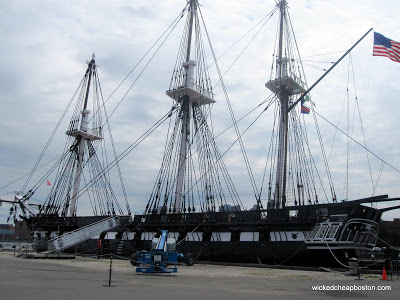 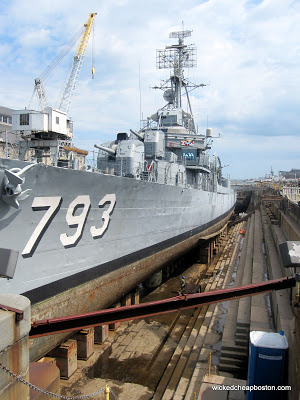 15. Bunker Hill Monument
This 221 foot obelisk honors the colonists who died in the Battle of Bunker Hill on June 17, 1775. The colonists lost the battle but the British also took a big hit.

If you want to punish yourself, climb the 294 stairs to the top where you’re met with a tiny window. Or just go to the nearby museum – both are free.

Confession: I didn’t go to Bunker Hill. I know, I should’ve, just to get the full experience. But by this time I was hungry and cranky and my feet hurt.

To get back to Boston, you can take the MBTA ferry from Charlestown Navy Yard to Long Wharf (make sure you have cash on hand to buy your ticket. I didn’t. And I could NOT find an ATM) or take the 92 or 93 bus which stops nearby that go to Downtown Crossing.

My Freedom Trail week is over, but I’m really glad I took the time to do it.  I learned a lot about the city, had a few really beautiful days out and about, and didn’t spend a load of money doing it! I hope you feel inspired to walk the trail yourself!