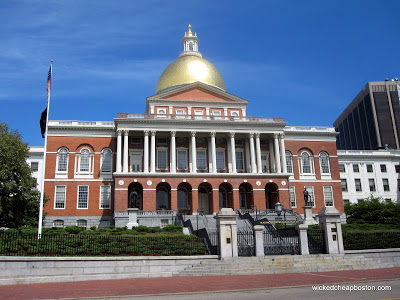 Today I walked and visited sights along the first half of the Freedom trail, from Boston Common to Old Corner Book Store.  The weather was beautiful and the crowds small.  If I could have gotten a foot transplant somewhere along the way, I definitely could have done more. But, my dogs were barkin’ and I had to head home.  Click on any of the photos to see full size. 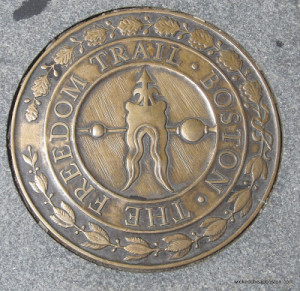 1. Boston Common
The “Common” is America’s oldest public park, established in 1634. Colonials going for ye olde walke along the park would have seen cows and other livestock grazing, those nasty Redcoats who encamped there during the British occupation, bonfires and celebrations to mark the end of the Revolutionary war, and maybe even a hanging or two. Today, its mostly tourists, tanning college kids from nearby Suffolk and Emerson, folks taking their lunch break, and homeless people. 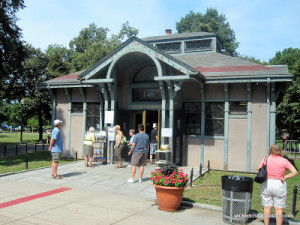 The red line of the Freedom Trail officially starts here, at the Visitor Center. 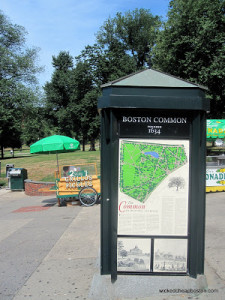 Real reason for this picture: to document the fact that there’s a vendor cart selling only pickles. 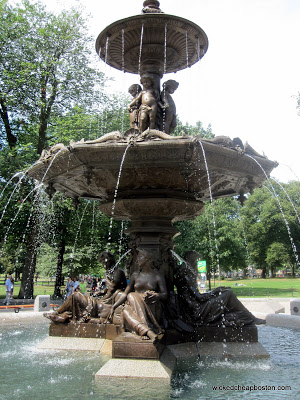 Frog Pond is (usually) open for wading in the summer, and is frozen over for ice skating in the winter. 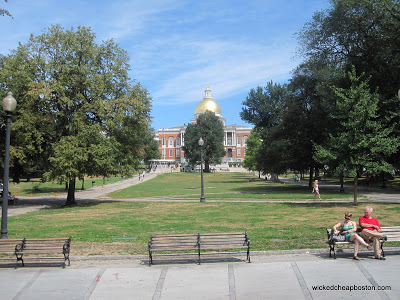 View of the State House from the Common

Robert Gould Shaw and the 54th Regiment Memorial. Honoring the first regiment of African American soldiers in the Civil War made famous during the battle at Fort Wagner. Their story is depicted in the 1989 film Glory. Fun Fact: this memorial was actually supposed to go in the State House but was too large to fit through the doors when finished. It now sits on Beacon Street facing the State House.

2. The State House
Designed by Charles Bulfinch (architectural rock star of the early 19th century, and quite the looker) on land that had been John Hancock’s cow pasture, the State House was completed in 1798.  The dome was originally wood and got its bling (of copper) by Paul Revere.  It was then covered in gold leaf in 1874 – a material which has to be replaced every so often.  It was gilded most recently in 1997 to the tune of $300,000.  The dome is topped with a pine cone to honor the lumber industry in Maine, which was actually part of Massachusetts at the time when the State House was built.

The State House offers free guided tours during the week.  The tours last 30-45 minutes and are offered between 10 am and 3 pm.  Reservations are requested but can be made on the day of (as I did this morning).

My tour group consisted of just me and one other woman.  While informative, the tour guide was somewhat stiff.  He had memorized his script well, but didn’t add any personality (which always makes for a more interesting tour.) Even so, I’d recommend this tour. The sites it visits are always open to the public, but at least for me, its more comfortable being escorted around. There’s some really beautiful architecture and artwork that’s worth checking out. 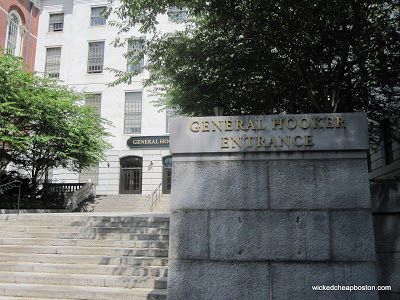 I can’t help it, this will always be funny to me. (Actually named after General Joseph Hooker, whose statue sits nearby.)

The view from Nurses Hall into the Hall of Flags 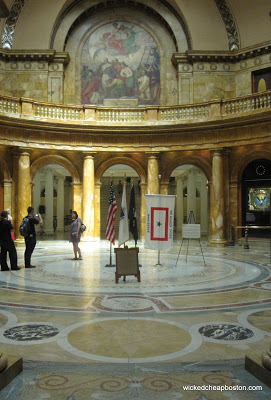 The Hall of Flags – I wish I had a more wide angle lens on my camera, this room is really more beautiful than this picture would suggest. 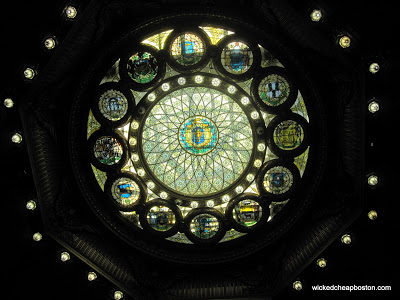 The stained glass skylight in the Hall of Flags. Again, my camera failed me on this one. It really is a gorgeous piece of art. It depicts the seals of each of the founding colonies with Massachusetts in the middle. 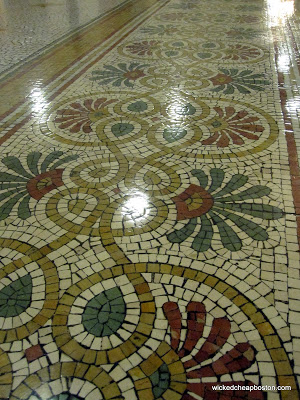 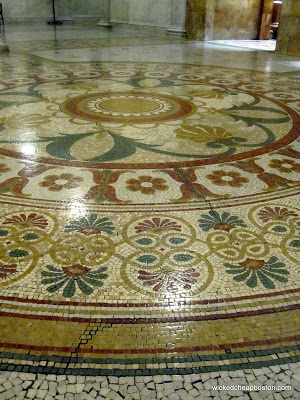 I love the mosaic tile floors. 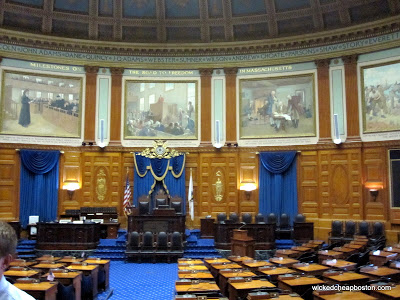 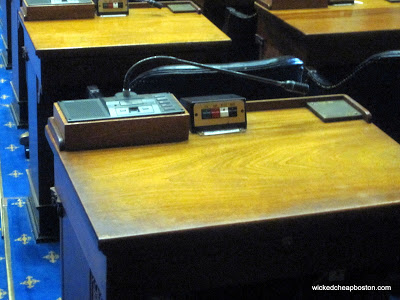 This is how the representatives vote – green button for yes, red for no, white to clear the vote and black to call a page. 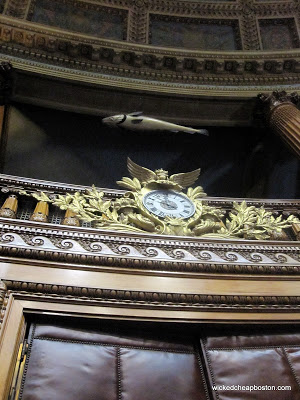 The “Sacred Cod” – a wood carving which serves as a reminder of the importance of the fishing industry to the state. A version of the cod has been hanging in the chambers of Massachusetts government since the early 18th century. 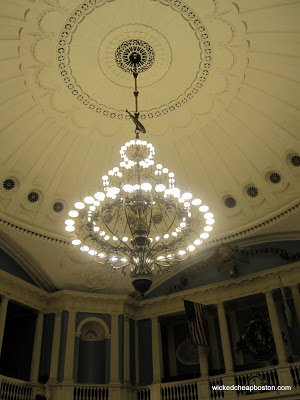 The Senate has their own gilded fish – the “Holy Mackerel” hanging above the chandelier. This began as a response to the Representatives taking the Sacred Cod with them when moving to new chambers (they had originally been in this room). The Senate Chambers lie directly under the gold dome. Fun Fact: signs along the highway that say “Boston 25 miles”, etc, are referring to right here under the dome. 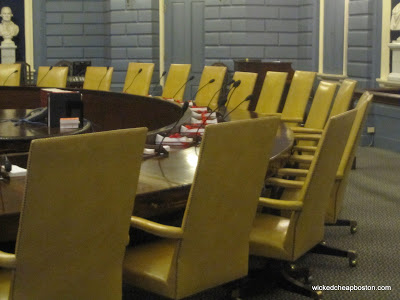 The senators’ chairs are adjusted so that they all are literally eye-to-eye. The booklets on their desks are bills that they are working on – literally bound in red tape. 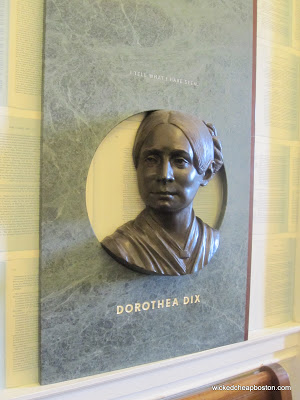 This one’s just for my Simmons College homies.

Built on top of the city’s grain storage building (or granary, which explains #4) in 1809, this church has some pretty neat firsts – first Protestant missionaries to Hawaii (1819), first antislavery speach by William Lloyd Garrison (1829), first singing of “America (My Country Tis of Thee)” (1831).  It is still an active Congregational church.

Self guided tours of the church are free. The church is open to sightseers from late June to late August, Tuesday through Friday, 9AM to 4 PM; and Saturday, 9AM to 3PM.  Simply go in the main entrance, sign a guest book, pick up an information sheet and head up to the second floor to view the sanctuary. A helpful guide is there to answer any questions you may have. 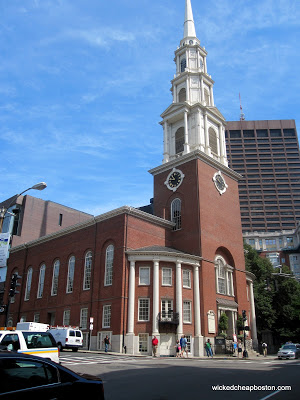 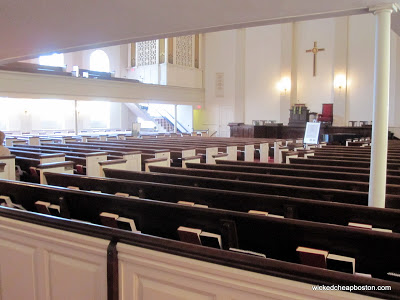 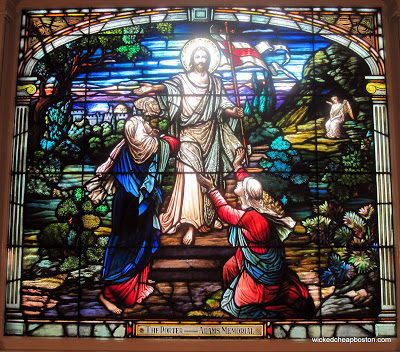 4. Granary Burying Ground
I’m just gonna put this out there – I think visiting cemeteries as tourist destinations is just weird. It kinda creeps me out, to be honest. But there are three on the Trail and so, here I am. The Granary Burying Ground was established in 1660. From the dates I could see, many of the headstones were from the late 18th century. The headstones of this era are smaller than modern ones and usually have carvings of images such as the Death’s Head (a skull with two wings). 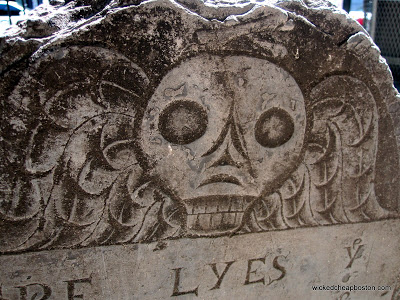 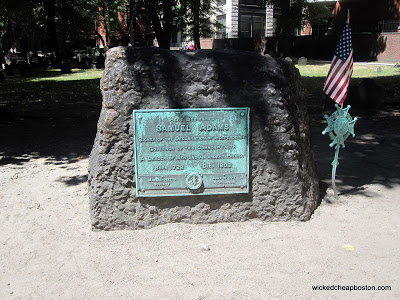 The tomb marker for Samuel Adams.

Sam Adams had the victims of the Boston Massacre interred in his family tomb. 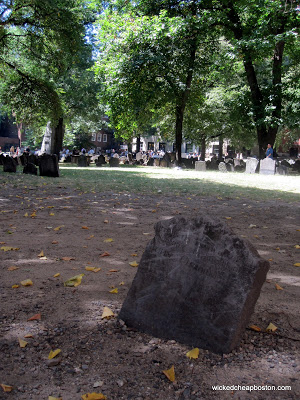 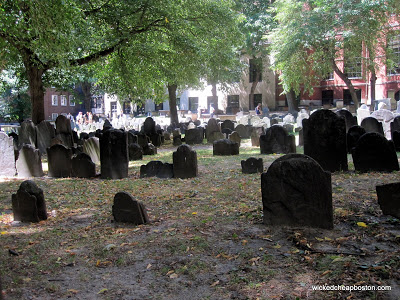 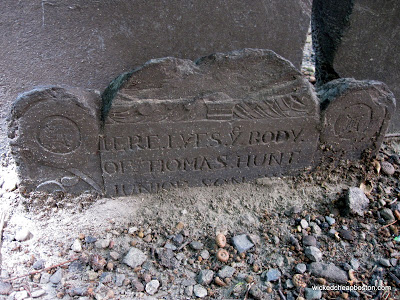 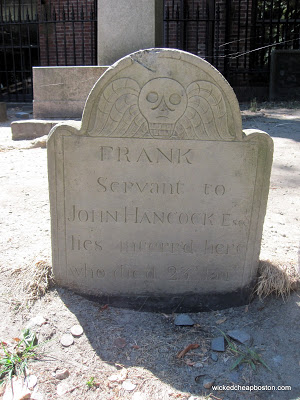 This is getting to be quite long so I will break it up into more parts. Up next: King’s Chapel, King’s Burying Ground, First Public School and Benjamin Franklin Statue and The Old Corner Store.