Get Stoked because Mount Sunapee just got Approved for an Expansion!

I love to ski, but it’s an expensive hobby. Renting equipment (or buying it if you’re at that point), buying lift tickets, the many layers of clothing and accessories you need, lunch at the base lodge, Apres beers, hotels or AirBnBs, traveling there and back…. the cost of a ski trip really adds up!! That’s why I’m a big fan of day skiing. Wake up early, make the most of your time there, and drive back that same day, saving yourself the cost of the hotel. I’ve done a lot of research on ski resorts in New England and I haven’t been to all of them, but I have been to Mount Sunapee. Until I ski a better mountain, and like I said I haven’t skied them all, I think Mount Sunapee may be the best ski mountain near Boston. Keyword, “near.” Obviously it’s not Killington, Stratton, Sunday River, etc. By “near Boston” I am only including places I can get to from Boston in under 2 hours driving. Mount Sunapee is about a 1 hour 40 minute drive from center city Boston, so that’s ‘day-trippable’ in my book. So when I got this email from Mount Sunapee Resort announcing that they’ve received state approval to expand the resort, I thought that to be exciting enough news to share with all of you. Personally, I’ve done my skiing for the season and I’m ready for Spring and Summer, but this is something to look forward to in coming Winters. #stoked

Newbury, NH – (April 6, 2016) – On April 6 the Governor and Executive Council of the State of New Hampshire approved a decision by the New Hampshire Department of Resources and Economic Development (DRED) to allow Mount Sunapee to move forward with its West Bowl Expansion.

The West Bowl Expansion will add 56 acres of skiing terrain down the west flank of Mount Sunapee into the town of Goshen. There will be four top-to-bottom runs serviced by a 5,100’ high-speed quad chairlift. The terrain will be primarily for intermediate and advanced intermediate skiers and snowboarders. All of the trails will be serviced by snowmaking. The West Bowl will create another entrance to Mount Sunapee Resort approximately two miles up Brook Road off Route 103 in Goshen. The base area will have a modest base lodge, parking and a beginner area serviced by a carpet lift.

“We are pleased with DRED’s decision which we believe thoughtfully balances conservation, recreation and economic vitality, and recognizes our efforts to be good stewards of Mount Sunapee,” says Jay Gamble, vice president and general manager of Mount Sunapee Resort.

The West Bowl Expansion is part of Mount Sunapee’s Revised Five-Year Master Development Plan which was submitted to DRED in June of 2014. There has been strong local support for the expansion. In March of 2014 the Town Of Goshen voted to create the Mount Sunapee Recreational District at their Town Meeting, which is zoned to accept the West Bowl Expansion. Selectmen from five surrounding towns submitted letters to DRED supporting the Master Development Plan.

“This decision by DRED will ensure that Mount Sunapee Resort will remain competitive with other New Hampshire and New England ski resorts and continue to be a strong economic stimulus year-round in the Lake Sunapee Region,” commented Gamble.

Read the approved decision and view maps of the expansion.

Here is the map they’ve posted showing the proposed new trails. Click on it to view more details. 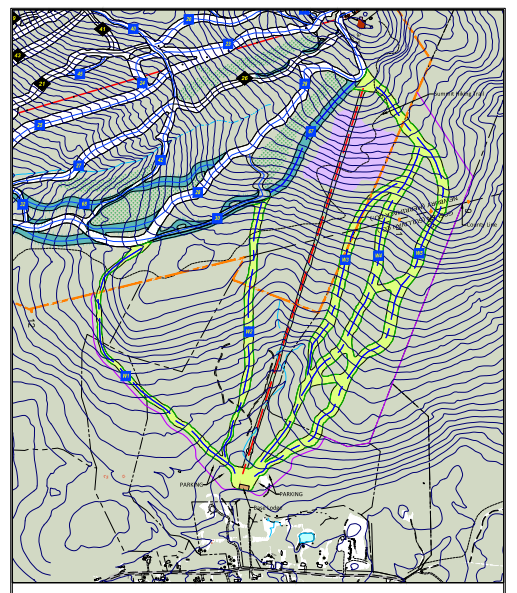